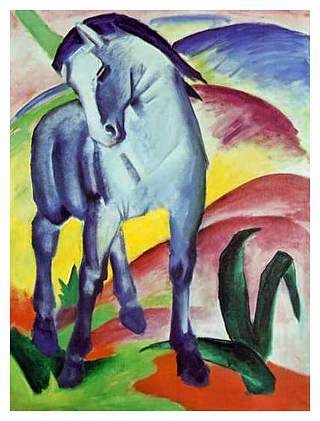 Franz Marc (1980-1916) loved to paint animals with pseudo religious themes. As a previous preacher he sought to create perfect forms that have a spiritual meaning beyond the canvass itself. He would paint idealized creatures that lived in harmony with the natural environment in which they existed (1). He mixed his studies of theology with his artistic works to express an ideal until he was killed by a piece of shrapnel in WWI cutting his artistic career short.

Within his work the animal is a superior creature living in nature and unable to err from its true existence. Blue is seen as a masculine principle, astringent and spiritual (2). It is a victory over the material world where the horse stands as a symbol of purity above the more chaotic forces that surround it within the painting. Man is seen as constantly striving to reach a higher form of existence and the horse represents that need.

The horse is seen as a sensitive and feeling being that lives within a wider context of the world (3).  As an impressionist painter Franz sought to reenact the religious principles of the Byzantine and Renaissance periods (4).  The horse takes on the form of Saints and religious icons. He created another way of understanding the basic principles of life and the dichotomy of heaven and earth.

Within a wider context Impressionism is the rejection of original forms seen in traditional academic painting (5). Instead of painting how things are seen they are painted more by how they feel. The works create a feeling in the viewer that helps them understand something deeper about human nature and the world around it. The colors may be vivid but the impressions should be concrete.

In Germany, at the time Franz was becoming known as a painter people felt disconnected to the spiritual world. Materialism seemed to trump most of human life making its way into the decisions society chooses. Franz worked to create greater levels of depth of human feeling through his works. His goal was to express a reconnection back to higher principles beyond the overall goal of material consumption. The blue horse is a creature that is free from material constraints.