Why Are Students Breaking up with STEM? 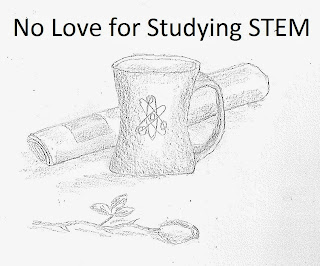 The National Center for Education Statistics (NCES) is the primary federal entity for collecting, analyzing, and reporting data related to education in the United States and other nations. Their recent report on college student STEM field attrition rates is designed to help understand potential factors of STEM competency loss. Government officials and business leaders are seeking to find ways to improve attrition rates in an effort to maintain U.S. intellectual abilities.

The report found that 28 percent of bachelor’s degree and 20% of associate’s degree students entering into a STEM field within 6 years of entering college in 2003-2004. Biology attracted 11% while math and physical sciences were unpopular at 2-3%. Associate degree seekers (9%) were looking for computer/information sciences that have a higher rate of pay when compared to the other fields.

A total of 48% of bachelor’s students and 69% of associate’s students left the STEM field by 2009. Interestingly, fields such as education and health had higher attrition rates while those in business and social/behavioral sciences had similar rates.  This seems to indicate that change in education is constant as students become more aware of their options and face educational obstacles.

Using a bivariate analysis the researchers found other problems beyond typical factors such as demographics, precollege academic preparation, type of universities, course taking and performance. Analyzing the information simultaneously revealed that the type of courses, math courses, and intensity appear to have an impact. Some students were falling out because the courses were too rigorous.

The entrants GPA and class performance were major predictors of dropping out or switching courses. Lower performing students may drop out of class or college but higher level performers may switch to other fields. Students that entered 4-year public universities were more likely to drop out than those who attended private 4-year institutions. Difficulty in entrance to a university had some association with retention.

The report mainly lists the reason why students either drop from or move away from STEM fields. Some of the findings indicate that ensuring students are prepared before entering such fields and having support while in those fields are beneficial for retention. Likewise, the adjustment of courses to gradually wrap up to more difficult courses within the first few years is necessary to bring students skills to a level needed to compete effectively. Overloading students in the course sequence may cause lower performing and unsure students to drop.