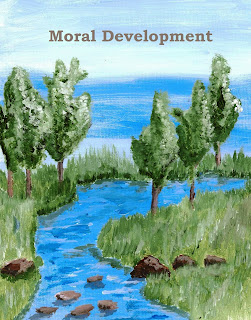 Derryberry, et. al. (2005), works to understand the early moral development in gifted populations. When comparing gifted youth to adult college students they found that such youth were more advanced than their adult peers. The research is designed to help understand the nature of giftedness, how to foster further development, and to encourage possible transfers to other members of the population.

Moral development has a number of stages. At the lowest stage such development is associated with a personal interest schema, then norm maintenance, and then the post-conventional schema (Rest. et.al, 1999). Each stage indicates a level of personal development that grows overtime. A large percentage of society never advances beyond the first or second stage.

At the lowest stage of personal interest schema people naturally interpret morality through what is best for them. This means that people are involved in self-serving interests and associations. In the maintaining norms schema morality is based with conventions, rules, and standards. At the highest level of post-conventional schema people base their moral judgments on universal principles of justice and fairness.

There are factors associated with development that include education, intelligence, complexity of thought, personality, and open to experience. People who are likely able to develop morally seek higher levels of education, can reflect on their thinking processes, have positive personality traits, and are open to trying and understanding new things. These are the people who love to experience and learn. They are capable of seeing themselves in a larger social context of history and institutions while able to see broad cultural trends.

The study indicates that age has only a small association with moral development. Gifted people are capable of taking in a wider context of information to come to their own moral conclusions and start doing so at a young age. These differences make them inherently unique compared to both their peers as well as older members of the population. The authors encourage greater study of this population as they are widely outside the bell curve of the norm and often fight against such identification.