Art: The Concert by Johannes Vermeer 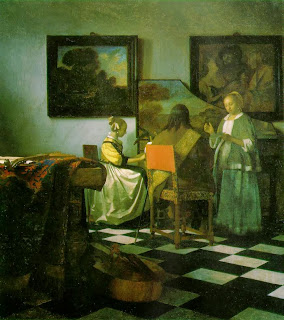 The Concert was painted by Johannes Vermeer in 1664 and was stolen in 1990. The painting features a harpsichord, singing and other pictures. Items are thrown around in the foreground in a haphazard manner. These items include jugs, carpet, mirrors and other items. The impression appears to be a casual meeting within a manor or home familiar to the author.

The meaning seems obscure and many don’t understand what message the painter is trying to portray. There are some hints with the paintings on the wall. Many have come to the conclusion that the author is trying to discuss harmony but hinting at something improper by nature. A special time and a special place with each member focused squarely on the process of music production.

It is also possible to see a lute and violin by the table indicating that this room may be one for music only. The people within the painting are completely unaware they are being observed indicating that they are true musical lovers. The room appears to be a blend of the real and the imagined indicating that Vermeer used both real objects as well as his memory.

The painter Johannes Vermeer was born around 1632 and died in 1675. He was seen as a middle class painter that appeared to complete much of his work out of local scenes as well as his home. Most of his paintings were with women. He did not complete many paintings and appeared to take considerable amount of time with each one which is apparent in their depth.  His death left his family in debt.