Song: I know where I am going

Modern Saber Fencing by Zbigniew Borysiuk moves into great depth about the sport of saber. It provides a discussion of fencing history, electronic scoring, modern saber, fencing nutrition, research on fencing, fencing talent, diagnostic tools, reaction, and information processing. The book offers scientific knowledge of fencing and has been reviewed by doctors and Olympic coaches to bring cutting edge information to the sport. It is a great book for those who may want to take their fencing from recreation to competition some day. It provides all of the basic information one needs to move down that path.

There is an interesting chapter on fencing and information processing. It discussed the concepts of stimulus detection, differentiation, recognition and identification. Stimulus detection is the perceptual moment when a stimulus occurs (i.e. opponent’s movement).  Differentiation is the understanding of the different types of stimulus (i.e. movement and location) Recognition affords the opportunity to detect and differentiate with a coordinated learned activity (i.e. the type of activity by opponent).  At the highest level is identification that once the specific action is recognized different types of activities can be used to respond (parry leads to counter parry and five possible alternative actions). 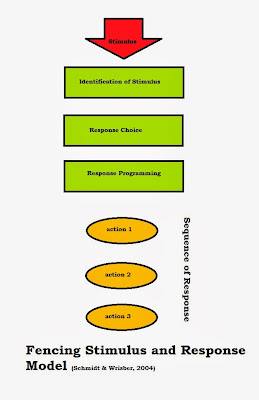 As stimuli move into one’s plane of perception it is identified (see above) and then the player can choose a learned response. The quality of the response is based upon the programming of training. At times the player can choose a single or multiple responses. When a player can create a complex chain of responses he/she is seen as more of a master of the game. Success being in control of the game and ensuring you understand and have responses to activities in multiple ways.  The more learned and ingrained varieties of movements, the better the player.

All responses from stimuli can be learned except acoustic. This is why new players are wilder in the game but those that understand the signals have more concise and less wieldy responses. A player has begun to master the game when he/she can overcome automatic responses and moves more closely into learned responses. These learned responses come from thousands of hours of practice. Understanding movements and ensuring proper form is necessary for future success when actions are ingrained.

Unlike some other sports, fencing is highly cardiovascular ,like running or swimming, and develops very refined sense of stimulus detection. A single wrist movement or adjustment of body posture can tip off the opponent to the next action. For example, while fencing last night the more skilled player with 20+ years of experience could tell when I was going to lunge. He was able to even point out how my front leg became tenser just before the attack. He used his experience to wait until I was in a full movement and then countered with a strike. Likewise, he noticed by the end of the first bout that I had good reaction times and decided a defensive stance with coaxing my actions worked best. This type of awareness cannot happen unless one has watched and practiced many endless hours of fencing.

If you desire to know how the three bouts turned out it was 5-0, 5-0, and 5-1. The single point I scored was from taking his advice, falsely tensing my leg, making a small action forward, waiting for his counter, and then striking him in the upper left shoulder. Sometimes you have to feel good about the little victories when you are learning. It only worked once!