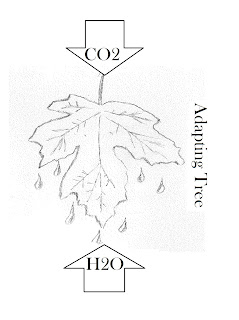 Forests are changing in their battle against climate change. In some parts of the world such tree networks are beginning to change so that they remove more carbon dioxide and use less water. The report was shocking in the sense that it throws conventional wisdom a little on its head. Ecosystem-level photosynthesis and net carbon uptake is increasing while evapotranspiration is decreasing. Trees are becoming more efficient.

The process works by closing the pores on leaves in order to maintain consistent carbon levels within the leaf and therefore allowing less evaporation loss of water from within the tree. This is done while not stopping the growing mechanisms of the tree. Some tree networks that are still in temperate climates of the northern hemisphere have found a way to survive changes in their atmosphere.

The downside to such findings is that the trees will pull less water out of the soil and release less water into the air. This will then impact the amount of rain some of the area receives for crops and farming. Yet the trees will be more resistant to drought and high heat conditions that may have destroyed them in the past. It could have an impact on regions.

The study was led by Dr. Trevor Keenan currently at Macquarie University in Sydney, Australia. Most of the research was completed while at Harvard University as a research associate. They analyzed 20 years of data from 21 northern hemisphere forests and found large scale patterns. Some areas have lost trees but where climate is still acceptable the trees are doing better than they did in the past.

Assuming that the trees release less water it may mean that farms may not receive adequate rainfall. This could have a negative impact on food production. The problem is that because the findings are so new it is difficult for anyone to say what the true result will be. The one thing we can be sure of is that the study will open interest and funding for new research in this area.