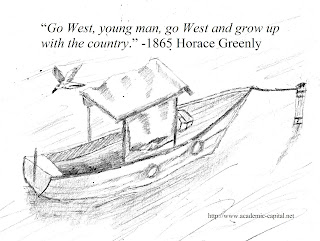 The value of a college education cannot be underestimated in an increasingly complex world. Business education is important in fostering new minds that will go forth and try out their ideas in the international market. Research helps highlight how a simple majority of business college students seek to develop their own business operations but feel as though these opportunities may not be forthcoming.

In 1865 Horace Greely stated, “Go West, young man, go West and grow up with the country.” The commonly used quote is deeply rooted in the psychology of young people who desire to flap their wings and seek their fortunes. The nature of business is about flapping wings and trying to get off the ground. Many do, many more do not, but it is the journey that takes precedence.

One of the reasons why young business students are so eager to start their own entrepreneurial endeavors lays in the uncertainty the recession has created over the past decade. They were reared in an era where corporate shifts, layoffs, and the movement of jobs overseas were common. In their effort to create some level of personal stability they seek the path of self-determination.

According to Summ, et. al. (2001), “Labor market conditions for most demographic groups of U.S. workers have been quite weak in recent years (2008-2010) due to the adverse employment impacts of the Great Recession of 2007-2009 and the anemic job recovery during the first 18 months following the trough of the recession in June 2009.”

As this group of students were attending high school and thinking of long-term opportunities the economy took a “nose dive”. While moving into college this same group of students hoped for business glory but suffered from declining opportunities. Despite the difficulties such students face they still seek to brand their mark on the global world and college continues to be an important learning avenue to allow that happen.

A study conducted by Tomkiewicz, Bass, & Robinson (2012) surveyed a total of 123 students in an AACSB mid-eastern accredited school.  Students were in attendance of the college of business and part of either a Fundamentals of Business course or a Strategic Management course. Participants were asked to consider their current station in life and determine where they would like to work in the future. Each student also completed the Fear of Success and the Fear of Appearing Incompetent instrument as part of the study.

-55% of students wanted to have their own business.

-Only 34% of those who wanted a business felt they actually be able to do so.

-45% of students had a preference for working in organizations.

-100% of those who had a preference for working in organizations stated that they are likely to have an opportunity to do so.

-Males were more enthusiastic about starting their own business.

The information from the results indicated that the majority of students had a preference for working within their own business while a far majority felt that they would not have an opportunity to do so. The study helps highlight how business college students have a desire to be independent in their work habits and control the nature of their work. However, as they become more aware of the trials, depth, and financing needed to run their own businesses such expectation declines.

Sum, A., Khatiwada, I. and Pahna, S. (2011). The continued collapse of the nation's teen summer job market: Who worked in the summer of 2011? Center for Labor Market Studies Northeastern University, August.